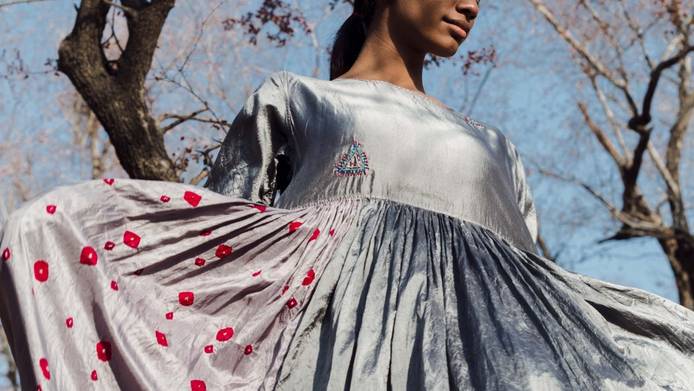 Launched in 2009 the brand Injiri, meaning real India, focuses on textile development and sustainable usage of materials from across India which, perhaps more than any other country, has long supplied the fashion industry with extraordinary handwoven textiles. But how much do we really understand of these centuries-old techniques and what goes into the creation of them? In this interview Injiri founder Chinar Farooqui aims to help expand our knowledge of the artisan communities in her homeland where specific spots are known for particular techniques.

Injiri retails in 300 stores globally including landmark boutiques such as Dover Street Market in London and Japan, and ABC Home in NYC. It does not retail direct to consumer, and only 50 to 100 pieces are produced per style every season. This number does not reflect limitations of artisan resources, Farooqui explains, as there is an abundance of craftspeople in each sector. Instead it reflects her commitment to maintaining quality product as coordination can be challenging with artisans spread all across India.

Rethinking the fashion industry’s relationship with the artisans of India

Farooqui refers to the Injiri team as “a workshop of about 65 people,” but the foundation of the business is built upon her close working relationship with the keepers of the keys, India’s master weavers, embroiderers, and tie and dye artisans. Indifferent to trends she focuses on products that pay homage to slow-fashion, timeless luxury and ultimately, India’s heritage. She remarks how in days gone by woven material was a precious commodity to be used frugally and making clothes was a lengthy process. She says her contemporary aesthetic is often informed by the simplest of clothes worn by peasants, farmers, the common man.

Craft clusters across India are at the core of the brand’s success. Most of the textiles involve the collaboration of multiple individuals, usually all within a family, each having their area of expertise to bring the creations to life. Farooqui talks FashionUnited through the places behind the country’s most popular techniques, and the unique characteristics of craft clusters.

The Jamdani weave, known originally as the Dhakai, is one of the most time and labour-intensive forms of handloom weaving but is considered one of the finest varieties of muslin. First named after the city of Dhaka, one of many ancient textile weaving centers in the pre-partition Bengal region, it was under the Mughal Empire that the Persian term Jamdani became popular. The Jamdani consists of a supplementary weft technique of weaving, in addition to the standard weft that holds the warp threads together. The standard weft creates a fine, sheer fabric, while the supplementary weft with thicker threads adds intricate patterns. Each supplementary weft motif is added separately by hand by interlacing the weft threads into the warp with fine bamboo sticks using individual spools of thread. The pattern is not sketched or outlined on the fabric but is drawn on graph paper and placed underneath the warp. The result is a complex mix of different patterns that appear to float on a shimmering surface.

Translated from Urdu Chikankari simply means embroidery. Experts believe it evolved from the white-on-white embroidery of Shiraz that came to India as part of the culture of Persian nobles at the Mughal court. The delicate and artful hand embroidery technique involves working white thread onto cool, pastel shades of light muslin, cotton and silk. The time consuming process of creating a Chikankari piece can range from a few months to a few years due to the single needle work often done by women in between household chores. The pattern is first stamped onto the fabric by hand, then six basic stitches and over thirty-five other traditional stitches are used in various combinations based on the required pattern. The embroidery is often divided among the artisans, with groups of three or more specializing in one particular stitch. And, as each group finishes their part, the garment is passed on to the next group to add their speciality stitch.

Originating in India’s silk city, Bodhan, the craft of Pochampally Ikkat involves dyeing silk thread and weaving it to create traditional geometric patterns in the Ikkat style. Iterations of Ikkat have long been a part of ancient Indian weaving traditions and have earned the Pochampally Ikkat a place on UNESCO list of world heritage sites for its iconic saree weaving clusters.

Traditionally woven in silk, a Pochampally Ikkat is time-consuming, passed down through families, and survives in a few villages mainly in the Nalgonda district in the state of Telangana. The warp, weft, or both are tie-dyed before weaving to create designs on the fabric and a process of wrapping determines the design. The warp threads are dyed and when unwrapped the areas under the ties have stayed the original color. Care must be taken when putting the warp on the loom to keep all the threads in position for the design to work.

The Indian state of Gujarat has long been the entry point to the Indian sub-continent and a major trade and learning centre, with the sea on its left and a vast white desert on its right. Its people have been keepers of heritage crafts, one of which is the Bhujodi, named after its textile center.

Mughal migrants from Rajasthan over 500 years ago crafted the woolen veils and coarse woolen blanket for the Rabari community, to protect for the herdsmen out in the open fields. The blanket was worn either over the shoulder or around the waist and also as a turban. Their modern-day descendants use wool from local sheep, but the yarn, while in its raw form, breaks and gets entangled easily. So the woolen strands must be soaked before use in a thin paste of boiled wheat or rice flour, sun dried in the fields, and then separated by combing. Traditionally the men of the family do this while the women make the yarn on the charkha, laying it on the loom and finishing off the product with the iconic Abla embellishment.

The origins of Bandhani’s tie dye technique, also known as Bandhej, can be traced back to the Indus Valley civilization, one of the most ancient methods of patterning fabrics with the earliest example seen in 6th-century paintings of Buddha. The dye is prevented from reaching parts of the fabric through tying pinches of it, a process mainly done by women. For complex designs, blocks or tracing sheets with pinholes are used. Three basic tools are necessary for tying the Bandhani pattern: strong cotton thread, a glass pipe used to hold and tie the thread, and a thimble to pluck a tiny area to tie.

One of the many traditional crafts of Rajasthan is the Jaipuri Razai, the art of quilt making, traditionally made using hand-spun and handwoven khadi and hand-carded cotton filling. Born out of necessity, the cold winter nights in Rajasthan inspired people to quilt bed covers and the ancient process remains unchanged today. Dhunai, the carding, refers to the fluffing and cleaning of cotton done on a large wooden bow-like structure called a Pindar. Then a layer of the carded raw cotton is spread onto the stitched outer layer using hand and bamboo sticks. Finally it is flipped inside out and beaten to spread the cotton evenly, ready for the stitching process, done mainly by women, using basic running stitches of varying sizes. What should I wear today? After waking up, it is... Navratri 2021: Bring Out Your Inner Fashion Diva With These Fashion Tips

The nine days Indian festivity, Navratri has begun. This Indian...

There is no dearth of fabulous Jewellery design trends that...